The most important issue in a second-hand van is damp.
We see so many customers every year who have bought a motorhome or caravan via the internet. They have often travelled miles to collect it, and then when they bring it into us for a service, we have to inform them that the vehicle is too wet too warrant the cost of repair.
Checking for damp is simple with a damp meter, but other tricks are to look behind curtains, look in all the cupboards, plus just feeling the walls can give you an idea if there any hidden problems.

Try to get an idea of the value of the van you are looking at by checking out the completed sales of that particular vehicle online.
If you are a member of The Motorhome and Caravan Club it is worth giving them a ring
to see if they will give you an idea of the van’s value.

A service record is helpful to have as it guarantees that the van has been cared for.
It should really have been serviced in the last 12 months, otherwise we would not recommend towing the vehicle.

The specifications of vans are on caravantalk.com, which will help with confirming that the vehicle is complete and correct. 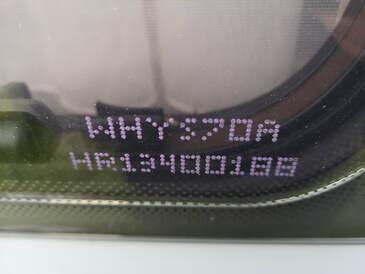 Vehicle Identification Number
All vans, since 1992, should all have a VIN (Vehicle Identification Number) in the corner of the windows. Ensure that the numbers have not been tampered with. Extra dots could have been added, or the entire text could have been polished off.
The number is also engraved into the side or top of the A-frame
(but often underneath the plastic cover).


You can ring CRiS, the National Register of UK touring caravan keepers,
to check about outstanding payments, etc. but there will be a charge.


If the van is dirty, it could be hiding something.
Although the layout and inside is the most important for customers,
always walk round the outside and inspect it carefully for cracks, dents, etc, and check the roof!
When you are inspecting the exterior of the van, look low down along the body for aluminium degradation.
This looks like blistering in the metal face. It is usually caused by water behind it, rotting it out.


Always have a look at the state of the tyres and their age (see previous blog online).


Checking your towing weight is also important. The weight of the van is engraved on the plate, close to the door. Foreign vans will have their weights marked on the other side, or on the bulkhead. For novices, a website worth looking at is
https://www.outandaboutlive.co.uk/caravans/towmatch/

Finally, as the old adage goes. If it is too good to be true, there is something wrong.